Here is a picture of Josette. Who I have temporarily named after the true love of Barnabas Collins in Dark Shadows. I remember the TV show when I was in school and Josette was a beautiful brunette who I never forgot. There is a little problem with her. Can you see it? If it doesn't draw your attention right away, I think in time you would see that her right eye is a little to far to the right. I think in Izannah's time, this would be one of those Judgement calls, unless the eye mold was not fixable but had to be painted in the wrong place, which I think happened in lots of her dolls. The mold set the eye in the face and there was not any where else to move it or correct it with a little paint. The molds were usually pretty deep in the eye sockets or protruded out a lot, so the eye had to go where the mold placed it, however, I can manipulate mine some. I can move it over a titch. I have in fact already moved it once. Because , to me she is so pretty and moving the eye is some trouble, I have been debating if I really need to do this, as all dolls have some flaws. Is this what you would call a flaw that is within acceptable limits? A lot of dolls have problems, and it has to be decided if the problem is there, but not so distracting to the doll to warrant a re-do. I have already made my decision. I will of course go back and move the eye over a little. I guess this is a flaw that does not fall with in those acceptable limits to me. Happily, I am satisfied with all her other pieces and parts. In this post, I included some pictures of  some rag dolls that have painted faces. Their painting is not finished, except in the case of the middle doll. I am through painting and now have to finish out the doll and clothes. The other two need more work, more stain, more styling and more touch-ups. These rag dolls are more work than previous dolls like this I made, as with their painted heads, this calls for a body suit, different hands and feet with stitching, and I hope a fine dress for each with a high collar. The hard part has been putting a face on. You can look at other photos, which I did, but ultimately, the face has to just develop, probably, in  a way you hadn't anticipated. this is the case in all three of these dolls. They have been fun though, and I have several more black ones to do, which I will have to stumble through to arrive at a good face on them. 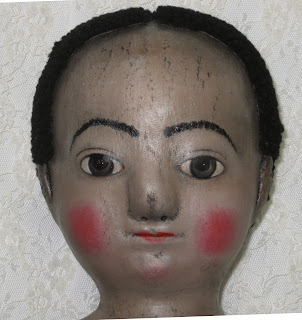 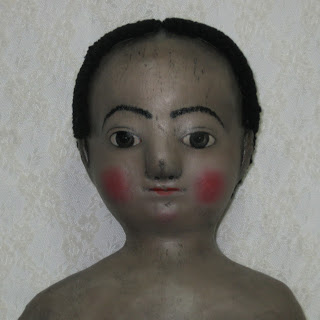 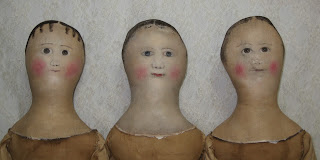